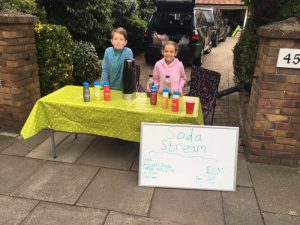 Community Link Foundation is on the look-out for people who would like to help them with fundraising.
The Southport based charity has been very lucky to have great support from individuals and businesses across the town and surrounding areas who have taken part in some great events and organised their own to fundraise.
Ben Payne and Esme Barron are just two of those people who have supported CLF and they did this after Ben came up with the idea of selling fizzy drinks during The Open. Esme lives in Birkdale so they used her driveway to put Ben’s plans into action and set up the stall for passers by.
Ben’s parents are supporters of CLF and Esme’s dad, Dave Barron, is an ambassador of the charity so they have known of the good work of CLF for many years. But, when The Open was in town the budding entrepreneurs decided it was a great opportunity for them to get involved with fundraising and they raised £33.
Due to the kindness of people such as Ben and Esme, it means that CLF is able to award grants to very deserving organisations, groups and individuals.
CLF would now really like to work with people who can host events for them or take part in fundraising challenges. This will enable them to continue giving out grants in the community.
Enda Rylands, chairman of Community Link Foundation, said: “We’d love to hear from people who would like to hold an event for us, whether it’s a quiz night or a charity football match. We are dedicated to supporting as many people as possible with grants. If you would like to get involved, please get in touch and we can help with ideas and support you with fundraising.”
For more information go to www.clfoundation.co.uk.