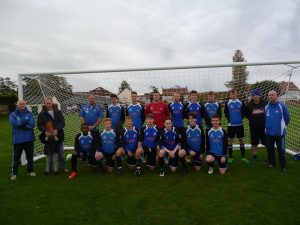 A Southport Football Club has taken delivery of new equipment ready for the season ahead, thanks to funding from Community Link Foundation.

Southport Trinity Amateur Football Club applied to Community Link earlier this year when they were looking for funding to replace old goal posts with a mobile set.

They were successful in their application to the charity that supports organisations and individuals in Southport and the surrounding areas. The club was able to purchase the new mobile set of goal posts in time for 2017/18 season. The new posts are much easier to move and store away, helping to keep them secure and away from possible vandalism.

The club has now named Community Link Foundation as their charity partner for the year ahead.

John Stansfield, Club President, said: “Southport Trinity Football Club is pleased to have Community Link Foundation as its Charity Partner. We see the club as a perfect fit for supporting people and organisations in the community. Now in their 120th season, the Club has regularly supported local good causes either individually or by donation to charitable bodies. By joining with CLF, we believe the club can reach a wider community and support the good work already being achieved. I would encourage other sports clubs to get involved.”

“As a Club who operate within the Southport area we provide soccer for both the very young, under 4s, to those at youth and senior level. Most recently, we have introduced sessions for young girls at our sports ground. Parents interested in this new venture or other coaching can find information of all our activities on the club’s website, Facebook page or Twitter.”

The club, which has been established for 119 years, currently runs three senior, two youth and 16 junior teams in four local leagues and the goals will be used by all age groups.

Mick Hynes, Southport Trinity’s Chairman, said: “We’d like to thank Enda Rylands and all at Community Link Foundation, on behalf of the club for the funding of mobile goal posts. They will be a tremendous addition to our facility and will save both time and effort in preparing for matches.”

To find out more information about Community Link Foundation, go to www.clfoundation.co.uk.