The League has been presented with a defibrillator which is now located at Portland Street playing fields. Community Link Foundation pledged to donate defibrillators to local community groups and organisations following the shocking scenes that were seen on the football pitch in the Euros 2020.

Trustees of the charity met shortly after Christian Eriksen had been taken ill on the pitch and announced that they were accepting applications from local community groups and teams to request a defibrillator.

Southport and District Amateur Football League made an application and has been successfully awarded a defibrillator. This is available for any person who may display signs of cardiac arrest whilst playing football or members of the public using the park. It has been fitted on the wall at Portland Street playing fields and can be used in a medical emergency. Familiarisation and training is currently planned to be delivered to the Southport and District Amateur Football League Committee Members.

Dave Pinder, League Secretary, said: “Hopefully it will never be needed but should anyone ever require it, because of the extremely generous award by CLF, we are fortunate to have one here. They really have shown in the past that they are lifesaving so we are very pleased to have one on site, not just for the footballers, but for the community too.”

Enda Rylands, chair of Community Link Foundation, said: “We know that defibrillators can make a real difference to people who are in cardiac arrest so it was important to myself and the Trustees that they should be available to sports teams and organisations.

“We were pleased to be able to provide one for the Southport and District Amateur Football League as so many people use the playing fields at Portland Street, so we feel that this is a really good place for one to be. While we hope it never has to be used, we hope it brings comfort to the community knowing that it is there.” 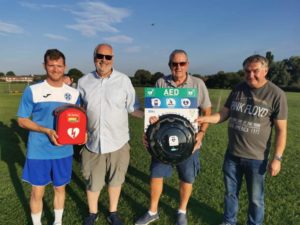