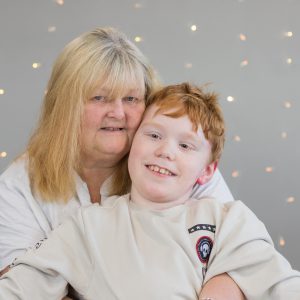 A boy who was born addicted to heroin and severely disabled is being given a new lease of life. Dylan Roberts, from Southport, has cerebral palsy and complex health needs and is wheelchair dependent. He was born addicted to heroin and was adopted by amazing mum Karen after he went to her for respite care.
Dylan, who is now 12, attends Merefield School in Ainsdale in Southport. He has quadriplegic cerebral palsy, cortical blindness, global development delay and epilepsy. He suffers in pain every day due to his complex medical needs. Mum Karen has been fundraising so he can have an operation called selective doral rhizotomy. If he could walk, the operation would be free on the NHS but as he is wheelchair-bound it has to be self funded.
His family had already raised £8,500 but needed £15,000 for the operation to go ahead. They applied to Community Link Foundation for a grant towards the fundraising.
The charity, which is based in Southport, helps people and good causes in the Southport, Formby and Ormskirk areas and agreed to make up the shortfall in funding.
When Dylan was six he had major hip reconstruction and after that and with his spasticity he is often in a lot of pain in his hips and legs. The operation that they now have the money for will release the spasticity and the sensory nerves to relieve the pain.
Karen said: “We were shocked when we were told that because he can’t stand or walk the operation wasn’t available on the NHS, and so we began our fundraising.”
“I would like to say a massive thank you to Community Link Foundation for the grant given to us for Dylan’s SDR operation.”
“We have been blessed by the support we have had from lots of people and when I applied to CLF for a grant I never dreamed how generous they would be.”
“I cannot thank them enough to make it possible for my little man to be able to have his operation and be free of pain.”
“We are now waiting for a date with a mixture of relief, gratitude and a little bit of nerves. Once again, a huge thank you.”

Enda Rylands, chair of Community Link Foundation said: â€œWhen CLF was founded, it was because we really wanted to be able to make a difference to people’s lives.

“When we were sent this application it was clearly evident that any money we could donate would make a huge difference to young Dylan’s life and this is exactly the reason that we continue to do what we do.”
“We are delighted to be able to help Dylan and watch his health improve once he has the operation. We are very grateful to everyone who supports CLF and makes it possible for us to help children like Dylan.”