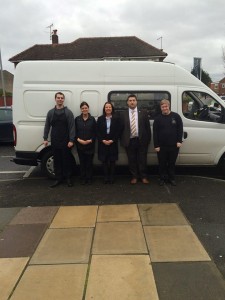 A SOUTHPORT charity is getting back on the road after all the money they’d worked hard to raise was stolen from them.
The Learning Rooms, a day centre for people over the age of 16 who have learning difficulties and disabilities, had been fundraising for a new minibus and had raised a few thousand pounds through open days, car washes, bag packing events, and other fundraisers when they had all their funds stolen during a break in of their Windsor Road site.

Local charity, the Community Link Foundation, was able to step in and help with the funding of two minibuses for the organisation which has made “an enormous difference” for the clients of the Learning Rooms.
The charity has two sites, one on Windsor Road and one at Four Seasons on Liverpool Road, and the buses mean that they can collect and drop off their service users each morning and afternoon, and transport them between sites.

The Community Link Foundation donated money to help with the purchase of the minibuses. CLF supports people and organisations within Southport, Formby, Ormskirk, Hesketh Bank, Rufford and Banks.
Ruth Wareing who owns the Learning Rooms with Amanda Doyle, said: “After being burgled last year, we were totally wiped out. All of the money that we had worked so hard for, had gone and we had to start again from scratch. But, with the help of the Community Link Foundation we have been able to get there which has just been amazing. We just couldn’t have done it without their help.”

David Barron, chair of the board of trustees, said: “We are delighted that Community Link Foundation has been able to make such a positive difference. We were so shocked when we found out what had happened to the money that they had worked so hard to raise.
“We were pleased that we were in a position to help, and we were able to do that thanks to the generosity of people who have donated to the Community Link Foundation and attended our fundraising events.”

One bus has wheelchair access while the other has seats in the front and space at the back for transporting stock. Their Liverpool Road site is a garden centre and cafe so it means that they can move stock and deliver plants.
Having both sites means that the service users can train at Windsor Road and then put their skills into practice at Four Seasons, before moving on to volunteer roles within the community.

Ruth added: “Over a week, we have 50 service users and being able to offer free pick up and drop off for them has made such an enormous difference. We run a business enterprise scheme so the money that the clients make is theirs to decide how they would like to use it so they’ve been on trips out and to the theatre and we’ve been able to use the buses for that too.”
“I really want to thank everyone who has helped because it has been such a great help, it’s just amazing. We really, really appreciate it.”
To find out more about the Community Link Foundation go to www.clfoundation.co.uk or email nicola@clfoundation.co.uk.