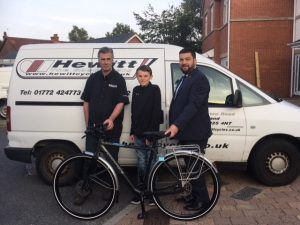 A teenage boy is now able to enjoy going out on his bike thanks to a donation from Community Link Foundation.
CLF were able to make a donation towards an electric bike for 15 year old Alex Hunt who has Becker Muscular Dystrophy, a muscle wasting condition.
Alex has pains throughout his body on a regular basis and finds it difficult to do things like run, climb stairs, ride a bike and play sports. He has had to give up being in a football team because of the pains in his legs. But last week’s delivery of a bike now means that Alex can get out and about on his bike with his family and friends.
His mum, Paula Ludley, applied to Community Link Foundation to buy Alex an electric bike so that he can join the family on bike rides and spend time riding with friends. It is hoped that the bike will give him more independence and make it easier to spend time with his friends. Muscular Dystrophy is a progressive condition so his parents don’t know what the future holds for him and because he doesn’t look like he has a disability, it can make it harder for people to understand his issues.
He has never been able to ride a bike on any kind of incline and the eBike will give him the freedom to join in with his family and go to see his friends on his own.
Paula said: “I can’t thank Community Link Foundation enough for Alexâ€™s eBike. It will make a huge difference because at the moment his Muscular Dystrophy prevents him from using a standard bike and he’s missing out so much on the usual kind of activities 15 year olds should be involved in. It means so much to Alex and the whole family.
“We’d also like to thank Paul Hewitt Cycles of Leyland who were really helpful in finding the most suitable bike for Alex.”

Tweet
Share
Pin it
Previous StoryGhouls and giggles are heading your way this October to raise money for Community Link Foundation. Next StoryAnd the Winner is…. October 600 club draw