A PHOTOGRAPHER has donated her earnings to Community Link Foundation after seeing how the charity helped a local child.
Julia Urwin is the match day photographer for Southport Football Club and when her pictures are used, she takes no payment herself. Instead she asks for a donation to charity.
This year she has donated Â£200 to Community Link Foundation after seeing how a grant they gave helped a child get enough funding to have a life changing operation.
Jude McHugh had an operation in January to help ease problems he had, caused by cerebral palsy. The procedure cost Â£21,000 and was funded by a grant from CLF and donations from family and friends.
Julia said: “I have been lucky enough to see first hand what an impact one of your grants has made in the last few months. I work at Ainsdale CE School where Jude McHugh attends.
“The operation, which Community Link Foundation partly funded, has made such a huge difference in such a short space of time. To see him walk the full length of the school hall unaided last week brought a tear to my eye.
“Thank you to Community Link Foundation for the help you are giving people who need it.”
Jude was diagnosed with cerebral palsy when he was 18 months old and his parents researched options and paid for private physiotherapy which meant that he had enough strength and movement to be considered for an operation on the nerves at the base of the spine. He was accepted to have an operation but they had to raise Â£21,000. Jude underwent four hours of surgery followed by weeks of physiotherapy and exercise to build up his strength.
Enda Rylands, chairman of Community Link Foundation, said: “We are very grateful to Julia for this kind donation. It really is a lovely gesture from her to give up her money to help others. It’s donations such as this that enabled us to help Jude and this will mean that we are able to help other people in the future. We are pleased to have been in a position to help Jude and it has been wonderful to see the progress he has made. “
For more information on Community Link Foundation, go to www.clfoundation.co.uk. 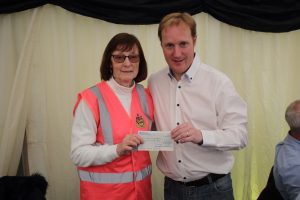 Previous Event Next Event
Join Us